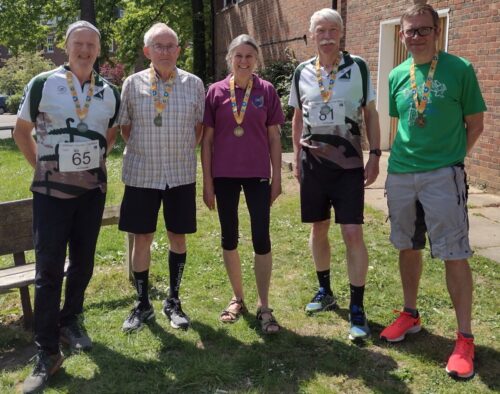 Colin, Eddie, Lyn, John and Roger travelled together from Braintree to enjoy the delights of Welwyn Garden City and were joined at the event by Peter and Sharon.

The event was originally planned as part of the celebrations for Welwyn Garden City centenary in 2020 but was postponed for obvious reasons! Ebenezer Howard began work on Welwyn Garden City in 1920 after financial failure of his first attempt to create a ‘Garden City’ in Letchworth, a few years earlier, His vision was to create a town that was a mix of town and country, with wide tree lined roads, well spaced housing and industrial premises to provide employment for the population. Housing was built to be a mixture of private and rented publicly owned properties to avoid creation of crowded ‘ghettos’ of poor inhabitants, as were common in large cities of the time. Blessed by a strong team of designers, led by the town’s long serving chief architect, Louis de Soissons, a building style was created, including the typical mock Georgian windows and a circular feature window. Most were built in local red brick, but innovation was permitted and some of the original houses were built in concrete. Although more recent properties have partially moved away from this style, there remains a strong planning requirement to build in keeping with the original designs in the central conservation area. Welwyn Garden City was built straddling the East Coast Main line at the junction of two, now closed branch lines to the east and west, the town’s new station, quickly became an important stopping point in the suburban rail network radiating out of Kings Cross. All finishers were awarded a celebratory WGC Centenary medal.

The courses set by David Dixon and David Hodson provided plenty of challenge and led us through diverse areas that kept you on your toes. Starting around Tesco's headquarters and the adjacent business park then moving to leafy estates and the bluebells of Sherrardspark Woods. The sunshine made it even more enjoyable. Everyone had a creditable run but Peter gets the prize for top placing coming 3rd in Supervet Men 55+